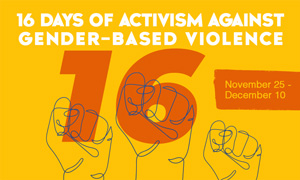 Toronto – November 22, 2022– Gender-based violence remains a daily threat to women, two spirit, trans, non-binary and gender nonconforming people in Canada. This week, UFCW Canada commemorates the International Day for the Elimination of Violence against Women on November 25, and the start of 16 globally recognized days of activism to end gender-based violence. Right now and every day workers are saying #NeverAgain: End Gender-Based Violence at Work.

For the past three decades during the 16 Days of Activism against Gender-Based Violence, individuals and groups around the world have called for the prevention and elimination of all forms of gender-based violence against women and girls. These 16 days begin with the International Day to Eliminate Violence Against Women on November 25 and end on Human Rights Day on December 10.

In Canada, December 6th is the National Day of Remembrance and Action on Violence Against Women, mainly marked with vigils and events to commemorate the 14 lives lost at Montréal’s École Polytechnique in 1989, as well as lives lost to femicide and gender-based violence through the year.

A 2018 survey conducted by UFCW Canada found that 84% of participants experienced harassment in the workplace within the last two years at work.

International Labour Organization Convention no. 190 acknowledges the universal right to a world of work free from violence and harassment and established a clear framework for ending it. Unions and advocates across Canada are calling on the government to fully ratify and implement C-190.