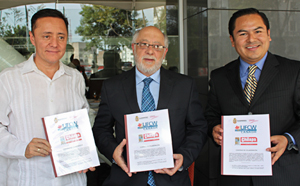 Mexico City - March 21, 2013 – UFCW Canada has signed a new agreement with the Mexican State of Guerrero's Secretariat of International and Migrant Affairs (SEMAI), and the municipal government of Chilapa de Alvarez to create the first-ever migrant census of the region. Together, the organizations will work to create a comprehensive overview regarding temporary agricultural workers who migrate within the northern states of Mexico, the United States and Canada. The census and analysis will assist in designing better migrant worker public policy in the region.

The agreement was signed in Mexico City by Secretary Netzahualcoyotl Bustamante Santin, Municipal President Francisco Javier Garcia Gonzalez, and the executive assistant to the National President of UFCW Canada, Victor Carrozzino. Mapping migratory movements in the region will also help to inform workers of their human and labour rights, as well as their workplace safety and organizing rights. The study will also allow the municipal government to develop specific, focused programs to facilitate migrant worker access to social benefits.

Earlier this year, National President Wayne Hanley, and the governor of the State of Guerrero, Angel Aguirre Rivero, signed a mutual cooperation agreement to protect the human and labour rights of temporary agricultural workers in Canada. The pact provides assistance, training and outreach to improve the living and working conditions of migrants before, during and after their stay in Canada.

Every season, more than 17,000 Mexicans work in Canada under the Seasonal Agricultural Workers Program (SAWP); a bilateral treaty between Mexico and Canada. The new agreement aims to address the current shortfalls in the SAWP program by offering coordinated support, accessible to every migrant worker.