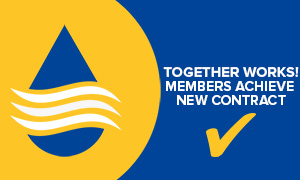 These members are now experiencing the benefits of belonging to a union.  Prior to unionizing their salaries varied but now everyone will be on the same pay scale thanks to having the ability to collectively bargain. The wage increases negotiated are a one-time lump sum payment of 3% of their annual 2022 salary; an increase of 2.5% in January 1, 2024 and a 2.5% increase at January 1, 2025.

The members will now have access to a grievance procedure and have a union to protect them and be the voice in the workplace for worker rights.

Prior to unionizing, these workers had filed complaints through the federal labour relations board as they were not being paid during their shift changeovers; the union has successfully resolved the issue and has succeed to in getting each member paid for the past two years and secured language for this issue moving forward.

UFCW Canada Locals 175 & 633 represent more than 70,000 hard-working Ontarians in almost every sector of the economy. To learn more about the outstanding work of UFCW 175 & 633, visit the Local Union's website.

Are you a non-unionized worker who would like to enjoy the benefits of a UFCW Canada union contract? Do you and your co-workers want to gain the union advantage at work? Join Canada’s best union, UFCW Canada, to make your workplace better today. Click here to join now.