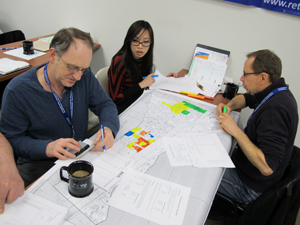 Vancouver – April 3, 2013 – Canada’s top union, UFCW Canada, recently completed a series of political action training sessions to further equip activists with the skills they need to elect a BC government that puts the interests of working families first.

In the province’s upcoming election – on May 14 – British Columbians will have a clear choice between the scandal-ridden Christy Clark Liberals, or the pro-community policies of Adrian Dix and the NDP, who are fully committed to fighting inequality, protecting important values like universal healthcare, and making a stand for employee rights.

Set to make a big impact on May 14, UFCW Canada Local 1518 activists attended the political action training in force, by sending large groups of participants to both courses, which involved a two-day program for election volunteers, and an in-depth five-day program for campaign leaders and full-time election staff.

A group of UFCW Canada Local 401 activists also participated in the courses, with the intention of supporting their B.C. sisters and brothers in the upcoming election, and sharing their invaluable experience with fellow community members and workers in Alberta.

To get the latest B.C. election and general political news, check out the UFCW Canada Political Action page, and be sure to subscribe to the weekly news bulletin Politics NOW!