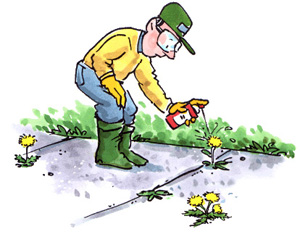 Municipalities have the right to implement by-laws protecting public health and safety. So ruled the Supreme Court of Canada in their landmark decision upholding a by-law passed in Hudson, Quebec that banned the cosmetic use of pesticides within municipal boundaries.

Buoyed by this decision, the Ontario Public Health Association (OPHA) passed a resolution at its annual general meeting urging the restriction of non-essential use of chemical pesticides on public and private lands. The meeting, which was part of OPHA’s 52nd Annual Conference, drew 500 community and public health professionals who discussed the issue of pesticide use. The resulting resolution asserts that many scientific and medical studies have demonstrated an association between pesticides and numerous health effects and therefore it is prudent for municipalities to use the precautionary principle when it comes to the use of pesticides on household lawns and public lands.

Also encouraged by the Hudson case, many local health, safety and environmental activists are renewing their efforts to reduce and eventually eliminate exposures to pesticides in their workplaces and communities.

As a union UFCW Canada also supports this initiative as many of our members are exposed to pesticides do to their jobs.  This in turn will protect the health and safety while on the job not just for our members but for all workers, for those who work on farms, live in our communities, and play in our parks.

Pesticides are substances designed to kill, injure, repel and neuter living organisms that some have determined to be pests. These pests might include insects, plants, fungi, moulds and/or rodents. The term "pesticides" refers to a wide range of products, including herbicides, insecticides and fungicides. They are available in a variety of formulations including sprays, dusts, powders, granulars, concentrates, liquids, pastes, pellets, pressurized products and tablets.

There are approximately 6,000 pesticide products registered for use in Canada. Most came into the market following World War II. The World Wildlife Fund has calculated that at least 50 million kilograms of these products are used in Canada each year, at a reported value of one billion dollars a year. They are used in agriculture, in fish farming, in homes, in day cares, in parks and recreational fields, on residential lawns, on golf courses, on pets, and even on children to combat head lice. They are also used widely in industries such as food service and textile industries.

Acute or short-term effects of pesticides can result in the following:

Long-term health consequences can also be devastating. A recent study of individuals newly diagnosed with Parkinson’s disease has found that home pesticide use and exposure is associated with a substantially
increased risk of developing this disease.

Children from conception to sexual maturity are most vulnerable to pesticides. The Environmental Health Committee of the Ontario College of Family Physicians report a higher incidence of leukemia, brain cancer and soft tissue sarcomas in children exposed to herbicides and insecticides. Emerging science has also linked a wide variety of health problems in children to their parent’s exposure to pesticides, including birth defects, premature birth, learning and behavioural problems.

These latter effects were central to yet another recent study involving pesticides, this time conducted by U.S. anthropologist, Dr. Elizabeth Guillette. Guillette investigated the effects of pesticide exposure on preschool children from the Yaqui region of Mexico. The study had been prompted by earlier reports from the region of the high levels of multiple pesticides in newborns’ cord blood and in breast milk. It concluded, "Functionally, the exposed children demonstrated decreases in stamina, gross and fine eye-hand co-ordination, 30 minute memory and the ability to draw a person."Videotaped sessions with the children also visually demonstrated the heart breaking effects of pesticide exposure.

What are the laws that regulate pesticides?

The Pest Control Products Act (PCPA) regulates pesticides in Canada. Passed in 1969, it has never been systematically revised. But the need to update the Act has been recognized and advocated for years. To this end, Marlene Jennings, a Liberal member of parliament for the Quebec riding of Notre-Dame-de-Grâce — Lachine, has recently introduced a Private Members’ Bill that prohibits use of pesticides for non-essential purposes. In effect, this bill shifts the burden of proof to producers by placing a moratorium on the cosmetic use of chemical pesticides in the home and garden and on all recreational facilities, until such time that scientific evidence showing use to be safe is presented to parliament and concurred by a parliamentary committee.

Of particular interest to workers is another proposal to bring pesticides within the framework of the Workplace Hazardous Materials Information System (WHMIS), requiring all pesticides to meet WHMIS requirements, including those for labelling, and Material Safety Data Sheets (MSDS). Currently pesticides are exempt from WHMIS laws.

Pressed by health, safety and environmental activists many Canadian municipalities are not waiting for other government jurisdictions. They have already moved to protect their workers, environments and citizens by passing bylaws to reduce or outright ban the use of pesticides for cosmetic purposes. Most are limited to uses on public property, but with the recent Supreme Court ruling upholding a municipality’s right to implement measures protecting the health of citizens, up to and including restrictions on private property, others are looking to broaden their approach.

Prompted by concerns about the health impacts of pesticides on municipal workers and the public, the City of Waterloo was one of the first municipalities to adopt effective alternatives for the management of green spaces. Twenty years ago more than 70 per cent of Waterloo’s green space was sprayed with pesticides. Today only 0.05 per cent of Waterloo’s parks and fields are sprayed, primarily for outbreaks of poison ivy. Based on Waterloo’s example, the following steps comprise a natural approach also known as Integrated Pest Management:

Insect infestations that threaten the health of your lawn or garden can be treated without harmful pesticides as well. The following are a few tips for the most common pests:

Organic farming uses similar principles. Concerned about their health and the environment, larger numbers of consumers are turning to organically grown food. For similar reasons and to meet consumer demand, farmers are rediscovering more natural farming methods. Other practical considerations also come into play. Only about one per cent of a pesticide actually reaches its target. Many pesticides are losing their effectiveness as the bugs and plants they are designed to eliminate develop resistance. (Already 504 insect and mite species, 150 plant diseases, and 188 weed species have developed resistance.) Further, even though farmers have increased their usage of pesticides, they are still losing about 20 per cent of their crops to weeds and insects, the same proportion as they lost in 1930.

In buildings most have found the best way to eliminate pests is to eliminate the conditions under which they thrive. For instance, the Metropolitan Toronto Separate School Board first introduced an Integrated Pest Management System in 1995, again in response to worker concerns for their health and the health of students. This system included:

Treatment for head lice also enjoys simple alternatives. While there are many pesticide-free shampoos on the market now, Dr. Moshe Ipp of Toronto’s Hospital for Sick Children recommends massaging in a 50:50 combination of mineral oil and vinegar. Cover with a shower cap. Wait one hour. And remove nits with a vinegar soaked comb. Wash with regular shampoo.