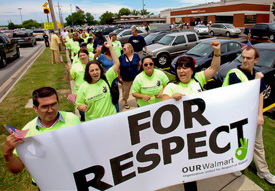 Washington, D.C. – May 25, 2013 – UFCW's commitment to help bring justice to Walmart workers has been honoured by the International Labor Rights Forum (ILRF). The ILRF is an international advocacy organization dedicated to achieving just and humane treatment for workers worldwide.

On May 22, at the ILRF Annual Labour Rights Award ceremony held in Washington, UFCW (United Food and Commercial Workers International Union) was recognized with an International Labor Rights Award for the union's support to help Walmart associates to form the group Our Walmart (Organization United for Respect at Walmart).

With thousands of members across the United States, members of OUR Walmart are the driving force behind a grassroots advocacy campaign to address grievances at their Walmart locations. To date, Our Walmart actions have successfully lobbied Walmart to change its scheduling policy to create more predictable schedules for associates, helped address workplace grievances by individual workers, and led to a historic nationwide strike on Black Friday (the day after the American Thanksgiving holiday), in which thousands of Walmart workers walked off the job for the day, joined by thousands of community supporters.

"UFCW and UFCW Canada will continue to support Walmart workers in their fight to end sweatshop conditions at Walmart stores, and at factories that supply Walmart," says UFCW Canada National President Wayne Hanley. "Unfortunately, Walmart continues to be brutally consistent in putting profits ahead of basic justice for Walmart workers, including Bangladesh workers who supply the company."

Following the recent tragedy that killed more than 1,100 garment workers in Bangladesh, a number of multinational retailers signed a binding building safety standards accord for Bangladesh suppliers they do business with. Walmart refused to sign the accord.