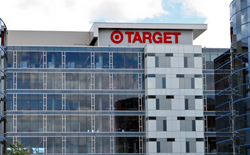 Toronto – June 10, 2013 – Target workers, former Zellers employees, and community allies from Canada and the United States are set to rally at Target’s Annual General Meeting, held this year in Denver, Colorado on June 12.

Leading the way is former Zellers worker Angela Rankin, who is making the journey from Toronto to Denver to rally with the group of Target employees, retail worker advocates and community members from across North America. Together with fellow demonstrators and supporters, Angela is looking forward to a direct conversation with Target shareholders on the importance of corporate social responsibility, and Target’s failure to respect the rights and earned living conditions of retail workers in Canada and around the world.

The rally is set to begin at noon on June 12, with workers engaging in a number of actions to demand the company’s attention. Rally organizers are also calling on retail workers throughout North America to support the action by tweeting their support and spreading the word about Target’s socially irresponsible behaviour, #Target #RetailRespect.

Angela and other retail workers will be asking the company’s senior managers for honest responses to the following questions: