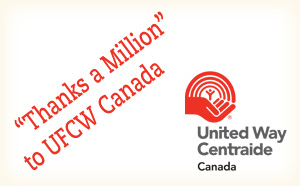 Ottawa – June 22, 2013 –  United Way Centraide Canada has named UFCW Canada as a 2012 recipient of its prestigious “Thanks a Million” award, which is presented annually to labour organizations and corporations that demonstrate an extraordinary commitment to the United Way and its noble causes.

Through their combined efforts last year, UFCW Canada members raised over $1 million for the United Way, a well-established and respected non-profit organization that works to lift people out of poverty, promote healthy life opportunities for all Canadians, and help children achieve their full potential.

"This award is both a significant honour and a testament to UFCW Canada members' dedication to their communities," says UFCW Canada National President Wayne Hanley. "We share a common desire with the United Way to improve the lives of disenfranchised Canadians and engage individuals to achieve social justice, and the 'Thanks a Million' award acknowledges our unwavering support for these causes."

The “Thanks a Million” award will be formally presented to UFCW Canada later this year. In addition, UFCW Canada's contribution has been recognized in the 2012 Thanks a Million poster and is featured in the United Way's annual report, which is available online at unitedway.ca.