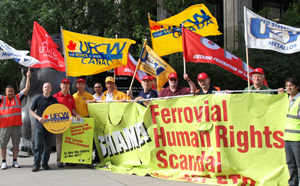 Toronto – July 12, 2013 – Building on city-wide actions throughout the week, UFCW, Unite the Union and progressive allies took the international campaign against Ferrovial’s violation of labour rights to the Ontario government on Friday, July 12 by picketing the Ministry of Infrastructure in downtown Toronto.

Activists engaged passersby with information about the Ontario government’s relationship with Ferrovial, the European conglomerate which evidence indicates blacklisted one of its employees for raising health and safety concerns.

To get the full story on Ferrovial’s connection to Ontario, click here.

The day before, activists also converged at the headquarters of engineering giant SNC Lavalin for its involvement with Ferrovial and the 407 ETR.

"Both of the contractors on the ETR 407 extension, Ferrovial and SNC-Lavalin, are now implicated in bribery scandals but we think allegations pointing to Ferrovial's involvement in 'blacklisting' – to stop trade unionists who report health and safety violations from getting work – are even worse," said Erkan Ersoy, Senior Organizer for Unite the Union.

"Blacklisting of construction workers in the UK has led to poverty, family breakdowns, and severe mental stress. What has happened to trade unionists in the UK could just as well happen here in Canada where Ferrovial also operates as the controlling shareholder of the 407 ETR, and the lead on its extension project with SNC-Lavalin," adds Brother Ersoy.

"We are asking the Ontario community, labour allies, and social justice activists to demand of their Ontario government that Ferrovial does not get any more public contracts until the company answers to the blacklisting allegations, and acknowledges fundamental human and labour rights – including a worker's right to raise health and safety concerns without reprisal."

To find out more about the important international campaign for labour rights, and how you can make a difference, click here.