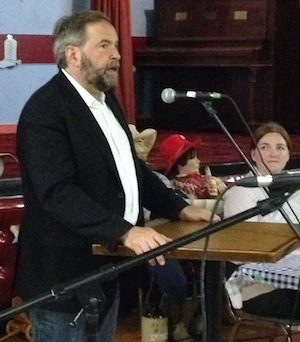 Calgary – July 22, 2013 – Between the flooding that impacted much of Southern Alberta and the undeterred celebration of Calgary’s “Greatest Outdoor Show On Earth,” the past few weeks have been nothing if not eventful for Albertans and the province’s largest private-sector local union, UFCW Canada Local 401. Whether in clean-up or celebrating, Local 401 activists have been especially present throughout the province, working closely with community allies, including the NDP.

Leader of the Official Opposition Tom Mulcair made his way to town to focus on the post-flood challenges facing Southern Albertans and to join thousands in moving forward with Calgary’s world famous Stampede.

Mulcair also visited the flood-ravaged town of High River. Touring the town, Mulcair said, “We saw the pictures on TV, but I don't think everyone understands the extent of the damage and how long it's going to take to get everything done. There are times when we will talk partisan politics. This isn't one of them.”

“It’s helpful that the news about RBC hiring temporary foreign workers to replace Canadian workers broke the way that it did,” said Yeager during the event. “Working on this issue every day, we know that abuses impacting both foreign and Canadian workers happen all the time. But the public often doesn’t hear about them. If more people knew about the problems going on, I think they would be outraged and we might actually be able to get something done about it.”

To find out more about Local 401 excellent work in Alberta, please visit gounion.ca.