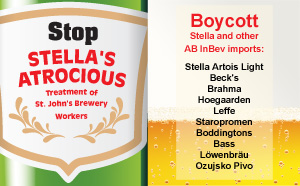 As proud members of the National Union of Public and General Employees (NUPGE), the St. John’s workers are making a brave stand against the global beer giant’s attempt to establish a pattern of concessions and roll-backs that could then be imposed on unionized AB InBev employees around the world.

You can also Act NOW by sending a letter to AB InBev to demand basic fairness for employees and their communities.