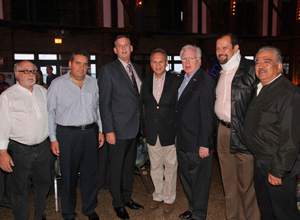 Chicago – August 21, 2013 – The leader of Mexico's National Farm Workers' Confederation (CNC) recently led a delegation to the UFCW 7th Regular Convention in Chicago to discuss the issues of Mexican migrant workers and immigration in Canada and the United States with UFCW brothers and sisters, labour leaders and government officials — including NDP Leader Thomas Mulcair who was a keynote speaker at the convention.

The delegation was led by Senator Gerardo Sanchez, President of the CNC. In April 2013, Brother Sanchez and UFCW Canada National President Hanley signed an historic
UFCW Canada - CNC mutual cooperation agreement to ensure that the rights of migrant agriculture workers are protected and defended in Mexico, Canada and the United States.

"We are grateful that Brother Sanchez and his delegation were able to bring their message to the Convention, says Brother Hanley. "Our partnership with the CNC recognizes that the issue of workplace justice for migrant workers reaches across all borders — as must our efforts to make it a reality."

Before returning to Mexico, Brother Sanchez and his delegation were joined by National President Hanley and UFCW International President Joe Hansen at a special reception. Other members of the delegation included Manuel Cota Jiménez, Chairman of the Mexico Senate Committee on Agriculture; Rubén Escajeda Jiménez, Federal Districts Coordinator for Agricultural; and José Antonio Rojo García de Alba, the Coordinator of the 84 CNC Federal Deputies in Parliament.