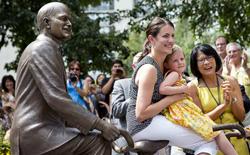 Toronto - August 23, 2013 - UFCW activists joined hundreds of other labour allies, friends, everyday Torontonians, and family members of the late Jack Layton for the unveiling of a statue which honours the memory of one of the most admired, loved and inspiring leaders in Canadian history. The former NDP Leader, an avid cyclist in life, is joyfully memorialized in a life-size bronze likeness of Brother Layton on the back seat of a bicycle-built-for-two; the front seat ready and waiting for friends, visitors, and admirers to take a ride in solidarity.

UFCW Canada, and UFCW Canada Local Unions 1000A and 175&633 were major contributors to the fundraising efforts which drew together labour allies, community groups, and individuals across Canada to pay for the project. The City of Toronto donated the waterfront where the statue is erected, right next to the newly renamed Jack Layton Toronto Ferry Docks through which thousands of families pass each year to take a ferry to the Toronto Island parklands.

"The memorial is a fitting tribute to an individual, and a leader who made such a difference to the lives and in the hearts of so many families across our great country," says UFCW Canada National President Wayne Hanley. "Jack truly believed in love, hope and optimism — in his own life, and in his vision for Canada."