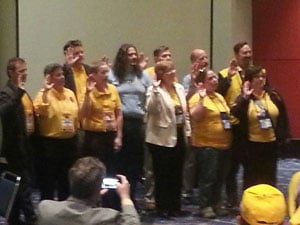 Toronto – September 13, 2013 – North America’s leading voice for workers and their families, UFCW, recently elected UFCW Canada activists from Locals 175, 1000A and the national office to the inaugural executive board of the International Union’s newest constituency group: OUTreach.  OUTreach is dedicated to building solidarity and mutual support with LGBTQ communities throughout Canada and the United States.

OUTreach joins United Latinos, Minority Coalition, and Women’s Network to become the fourth constituency group to receive a UFCW charter from the International Union – demonstrating the union’s commitment to equality for the LGBTQ community.

Sworn in at the 7th Regular Convention in Chicago, four UFCW Canada activists are now serving on the OUTreach executive board, after being elected at the inaugural meeting of OUTreach in August. Canadian members of the newly-constituted OUTreach board are:

“Eliminating homophobia, bullying, and transphobia is an enormous challenge but change has begun with us. In solidarity with our LGBT sisters and brothers, I encourage all UFCW Canada members, staff, and officers to engage and work together in initiatives that advance equality, diversity, and LGBT rights and to work toward a UFCW Canada that is inclusive of everyone,” says UFCW Canada National President Wayne Hanley, who is a member of Egale Canada’s Human Rights Trust Honorary Advisory Board.

In addition to serving a key role in OUTreach, UFCW Canada is leading a number of initiatives to create stronger alliances between the LGBTQ community and the labour movement, including strong support for national partner Egale Canada. To get the full story on these efforts, please visit the UFCW Canada Social Justice and LGBT PRIDE page.