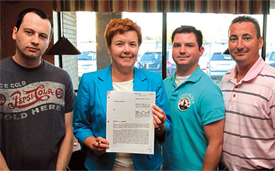 Winnipeg – September 20, 2013 – It was a long battle, but UFCW Local 832 members working for Staples at Leila Avenue in Winnipeg ratified the first union agreement in North America for Staples by 100 per cent.

“Members knew when they signed cards that we would be in a battle with the company,” said Sean Allen, a Local 832 member who participated on the negotiating committee. “This has never been done before, but we knew we needed to get a contract to start as a base and to work from there. This contract allows that.”

A two per cent across-the-board wage increase is scheduled in their first year with members receiving another two per cent wage hike in the second year of the agreement. Gone are the days when management can use favouritism to give wage increases. Members now have excellent grievance and arbitration language to settle disputes in a timely fashion. Seniority is defined and recognized, and it continues during leaves of absence or layoffs. As well, any member being disciplined now has the right to have a shop steward present during the disciplinary meeting.

The collective agreement also outlines  and  clarifies  many of the employer’s policies and practices – a  legally  binding  document  that  Staples  must  follow. Members receive paid bereavement leave, personal and family days, premiums and an improved vacation structure. The employees no longer have to worry that the company will reduce or take away benefits. And if there is a dispute or question in the workplace, or if management forgets that it must treat staff with dignity and respect, the union will be there to help all employees.