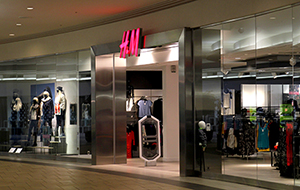 Montreal – November 2, 2013 – UFCW Canada Local 500 is pleased and proud to announce that members working as sales advisors at the H&M store located in the Galeries Joliette shopping centre have signed their first collective agreement. The location is the Swedish multinational’s first-ever store to be unionized in Québec. The contract runs until 2016. The agreement includes pay rate protection regardless of employment status, as well as better personal leave provisions for part-time employees.

“By joining an international union that is recognized for its expertise in the retail sector, not only did the sales advisors at the H&M store in Joliette improve their power relationship with their employer, they also empowered themselves with a strong voice to negotiate a strong collective agreement. By having a seat at the bargaining table, they were able to be part of the solution,” says Local 500 President Antonio Filato.

The Joliette store is the second Canadian H&M retail location to be unionized by UFCW Canada. An H&M store in Mississauga, Ontario was the first; it was organized in 2011. UFCW Canada also represents workers at a distribution warehouse in Mississauga that is devoted exclusively to supplying H&M stores across Canada. South of the border, RWDSU/UFCW represents H&M workers at 11 locations in the greater New York area. Elsewhere in Europe, thousands of H&M employees are also unionized.