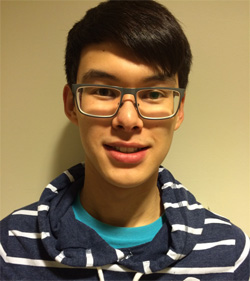 The union scholarship covers $8,000 in tuition fees over a period of four years. As part of the application process, Nicholas completed a 500-word essay describing how the union has positively impacted his life and his community.

Nicholas works in the front end of the store at the Zehr's supermarket on Essa Road in Barrie, about one hour north of Toronto. His responsibilities include working as a cashier, self-scan attendant, and front end supervisor when needed. He also operates the grocery store's garden centre in the summer.

Mr. Chun is currently enrolled full-time in his first year of the Bachelor of Commerce (BComm) program at Ryerson University in Toronto, where he is majoring in Business Management. He intends to focus his studies on Global Business moving forward and is as yet undecided on what his minor will be.

Since Nicholas commutes two hours to school each day, he plans to find an apartment in Toronto next year and says the union scholarship money will help him with rent expenses while attending university. "The time spent in Toronto near my school will help me greatly," Nicholas says. "I will be able to study better and I hope to get involved in extracurricular activities such as participating in a business networking group."

With respect to his career plans, Mr. Chun is aiming to graduate, gain employment experience in the private sector, and later pursue graduate level education. "With a Master of Business Administration (MBA) degree, I could take my career to new levels," Nicholas says.

Every year the UFCW International Union offers scholarships to union members or their immediate family who want to further their education and who demonstrate a commitment to their communities.

As UFCW International President Joseph T. Hansen explains, "our union stands for more than just improving our members' paycheques and benefits. The UFCW is about workers coming together to build better lives for themselves and to pursue opportunities," Hansen says. "That's why each year the UFCW awards several union scholarships to UFCW members and their unmarried dependents."