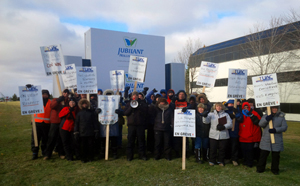 Montreal – November 17, 2013 – More than 220 UFCW Canada Local 291P members at Jubilant HollisterStier in Montreal were recently forced on strike after more than a year of trying to bargain a fair deal with the employer.

Despite 31 negotiation meetings and four conciliation hearings, the employer has not shown the expected openness in order to avoid this strike. “Before a transnational corporation became the owner of this business, we had always managed to negotiate efficiently in a better climate. In fact, this is the first time, in the history of our Local Union – since 1946 – that we are having a labour dispute,” says Local 291P President Sébastien Rheault.

The striking workers, who have been without a union contract since April 2012, held a membership meeting on November 10, 2013 where they rejected the employer’s so called final offer with an 85.5 % majority. The members also reiterated to their negotiation committee the mandate of doing everything in its power to reach a satisfactory agreement with the employer. The negotiations broke down on the issues of wages, group insurance and a major concession demand regarding sick days.

“The company’s offer is completely unacceptable for the workers because it would represent a setback in working conditions. We did not want to resort to this type of job action, but the employer is not giving us any other choice,” adds Brother Rheault.

No further meetings are scheduled between the parties for the time being.