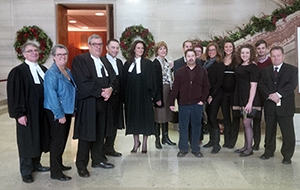 Ottawa – December 17, 2013 – Former employees and UFCW Canada members from the shuttered Walmart store in Jonquière, Quebec, and their spokesperson Gaétan Plourde returned to the Supreme Court of Canada on December 6, in a new effort to win their case.

This is the second time that solicitor Claude Leblanc represented former employees of the Walmart store in Jonquière, members of UFCW Canada Local 503, in the country’s highest court. However, this time he based his appeal on the provisions of Section 59 of the Quebec labour code which provides a freeze of working conditions during the process of unionization. “When an employer shuts down its business, which it is free to do, it cannot simply start anew. For a certain period of time, the employer is required to provide justification for the closure. However, the result is the same for the employees whether they are laid off, dismissed, terminated, or told that their services are no longer required or that the business is closing. They lose their job and in this sense their working conditions are modified,” he explains.

After more than eight years of legal battles, 190 former employees of the Walmart store in Jonquière are keeping hope that justice will prevail. “The reasons that motivated us to fight back in 2005 still apply today”, says Gaétan Plourde, former unionized employee at the Jonquière Walmart store. “I feel that this company showed us a total lack of respect. One of our rights in Quebec is freedom of association and the law is supposed to protect us from anti-union tactics by employers. It is our wish and hope that our rights will be respected at last. We expect legal redress that will have a positive impact on other Walmart stores while at the same time making other businesses less inclined to imitate this company», he adds.

Louise Lefebvre, president of UFCW Canada Local 503, remains optimistic that the former Jonquière Walmart employees will win their case. “We have a team of experienced lawyers handling the landmark case of these men and women whose fundamental right to unionize was violated. We are hopeful that their patience and determination will finally be rewarded after this long legal saga. We will stand by them until the end and will deliver on our initial commitment to have their rights upheld”, concludes Sister Lefebvre.