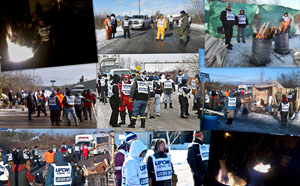 Toronto – January 10, 2014 – On Sunday, January 5, approximately 160 members of UFCW Canada Local 175 at Horizon Plastics Intl. in Cobourg were locked out by their employer after they rejected a tentative settlement. The members rejected the deal due to the nature of several concessions in the document. The members were surprised to hear that they had been locked out as it was their hope that negotiations would resume, following the vote, to work towards a more favourable deal.

Despite brutally cold weather the members have held strong on the picket line and will not be “frozen out” of what they deserve: a fair and equitable deal.

“The members' concerns are valid; the erosion of full-time jobs is unacceptable,” states UFCW Canada Local 175 President Shawn Haggerty. “It was a surprise to everyone to learn that these members had been locked out, but this has only proven to strengthen the ties of solidarity on our picket line.”

Although the company and the Union met in talks on January 7, no further deal has been reached and the members remain locked out. Workers at the facility produce and package residential and commercial plastics products.