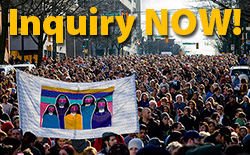 Toronto – February 6, 2014– More than 582 Aboriginal Women are Missing and Murdered in Canada but Prime Minister Stephen Harper has said that he is “skeptical” about the need for a national inquiry.

You can make a difference by joining the Digital March.

Participate in the Digital March for Missing and Murdered Women by:

In addition to the Digital March, you can also take action on this issue by joining the Feb. 14 Women's Memorial March in your community.

Find out more about the Feb. 14 Women’s Memorial March.