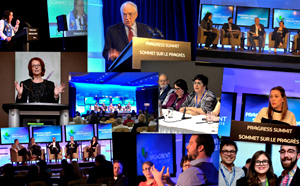 Toronto – April 2, 2014 – UFCW Canada activists joined more than 600 other labour and social justice allies and academics from across Canada for the first-ever Progress Summit, held in Ottawa, March 28 to 30. The Progress Summit was organized by the Broadbent Institute, named in honour of Ed Broadbent, the former leader of the New Democratic Party. The institute is an independent, progressive organization which campaigns for working people, their unions, and the environment.

At the Summit, participants gathered to share ideas and build capacity to win the struggles that are important to working people. Some of the keynote speakers and presenters included Ed Broadbent, Julia Gillard, the first woman Prime Minister of Australia, Mitch Stewart of 270 Strategies, Anastasia Khoo of the Washington, DC based Human Rights Campaign, French National Assemblywoman Axelle Lemaire, as well as a special performance by Canadian musical performer and social activist Sarah Harmer.

Utilizing a number of innovative workshops, participants at the Progress Summit explored bold new initiatives to make Canada a fair and just society for everyone – working people, migrant workers, indigenous nations, LGBT and all equity-seeking communities. UFCW Canada National Representative Roxane Larouche participated as a panelist in one the workshops – The Best Defence is a Good Offence: the federal attack on the labour movement. With so many leaders, activists and academics in one united gathering, the event was clearly a successful step forward in confronting the anti-worker agenda of the ultra-Conservatives.

“Congratulations to everyone at the Broadbent Institute who worked so hard to make the Progress Summit an incredible success,” says Paul Meinema, UFCW Canada National President, “UFCW Canada members across our country are proud to stand united with progressive movements everywhere to build a more just and sustainable Canada and global community.”