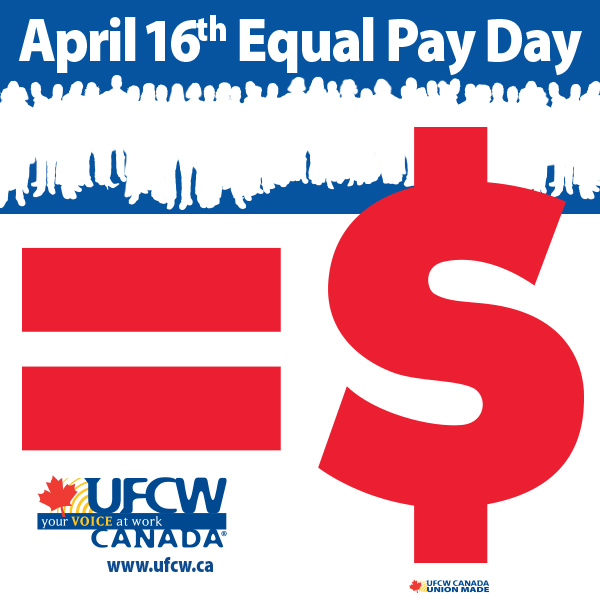 Toronto – ­­April 10, 2014 – On April 16, UFCW Canada activists from across the province will come together to participate in events marking Ontario’s first Equal Pay Day. The day is a time to celebrate our success in achieving pay equity, specifically through collective bargaining, and to reiterate our commitment to attaining equal pay for all workers across the country. Events will be held in a number of Ontario communities including London, Kingston, Ottawa, and Toronto.

UFCW Canada local unions have played a significant role in achieving the annual day to recognize the importance of pay equity. The Ontario government’s recognition of April 16 as Equal Pay Day is the result in no small way of sustained encouragement from our union’s member activists and leaders.

UFCW Canada welcomes the announcement while recognizing that much work still needs to be done. Women and racialized workers continue to be paid less than men and non-racialized workers in many areas of the economy. Unionization remains the most effective method to achieving pay equity across the board. Historically, the labour movement was one of the first advocates for pay equity in Canadian society. Together with the women’s movement, unions began making equal pay for work of equal value a key issue in collective bargaining – long before governments started to acknowledge its importance.

“While we certainly celebrate Equal Pay Day, our union will continue to work tirelessly for pay equity for all workers across Canada,” says Paul Meinema, UFCW Canada National President. “The fact remains that the best way to achieve pay equity is to join the union.”

Some of the Equal Pay Day events in Ontario: