By the Numbers – Workplace deaths, injuries and occupational diseases in Ontario

Toronto — May 28, 2014 — Every year, the Workplace Safety and Insurance Board (WSIB) collects data on deaths and injuries that occur in Ontario’s workplaces. However, when occupational diseases are accounted for, the number of claims reported by the WSIB represents only a fraction of the total number of workplace related fatalities. In a study entitled “Occupational Disease and Workers’ Compensation”, prepared for a government inquiry into Ontario’s compensation system, Dr. Annalee Yassi estimates as many as 6,000 people die every year in the province due to a combination of occupational diseases and injuries. 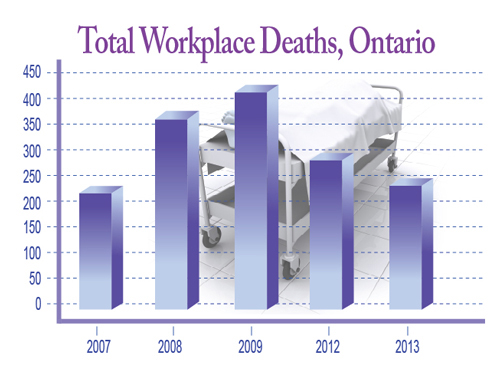 In 2012, the WSIB reported 238,373 claims, of which only 273 were fatal occupational disease claims. Occupational diseases cost the Ontario health care system hundreds of thousands of dollars each year – money that would be reimbursed by the WSIB if workers were given the resources to make the link between ill health and exposure to hazardous working conditions. In fact, the very first recommendation of the recently released final report of the SARS Commission calls for the “precautionary principle” of direct government involvement halting exposure to working conditions which bare even a potential to be hazardous. 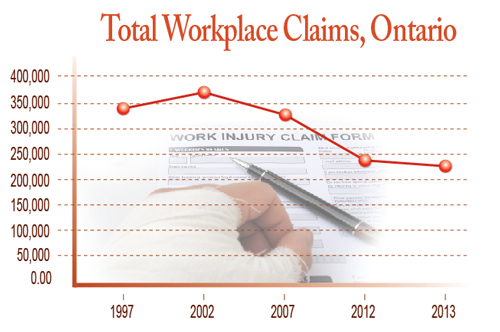 Today, 40% of lost-time injuries are for musculoskeletal disorders due to poor ergonomic controls in Ontario workplaces. Lost-time claims have decreased during the last two decades, but largely due to the manner in which incidents are reported by employers. Furthermore, rising unemployment and the loss of manufacturing jobs in Ontario has also contributed to fewer claims. The illnesses, injuries and deaths suffered by 38% of the Ontario workforce are not reported because these employers do not have compensation coverage by the WSIB. 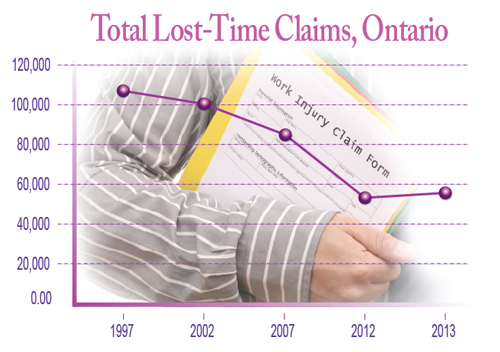