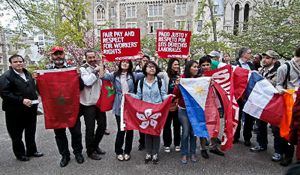 According to a statement released by the IUF, changes are currently underway at KFC Thailand that will allow the workers to stand up for their labour rights and demand a living wage. The IUF has expressed its appreciation to the many thousands of people who responded to the union's campaign by messaging the company and telling them to respect their employees.

The pressure campaign was launched after a union representative was summoned and threatened with legal action from Yum! Brands – the multinational corporation that owns famous fast food restaurants such as KFC, Pizza Hut, and Taco Bell – for attending the 1st IUF International Fast Food Workers' meeting in New York City, New York.

Prior to this, three KFC Thailand workers were terminated for establishing a union and requesting to bargain a collective agreement with the company in 2011. However, the three workers were later reinstated by court order.