Workers must define the future of work 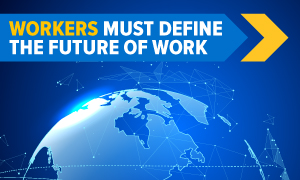 TORONTO – August 30, 2018 - As in previous eras of technological change, the voice of workers continues to be vital in helping to define the future of work – to ensure that a generation from now Labour Day remains an annual celebration of the value of workers and a society that produces good, fair-paying jobs. We must apply human intelligence to make sure that artificial intelligence and automation build income and stability not just for corporations, but also for workers and the community.

Whether you are a doctor, accountant, factory worker, truck driver, retail grocery clerk or almost any other occupation, the impact of automation and artificial intelligence is being felt everywhere. According to recent studies from the Brookfield Institute and the Mowat Centre, millions of Canadian jobs could be lost to automation over the next ten years, and hundreds of thousands of other jobs could be replaced by short-term precarious jobs.

Unlike previous eras where jobs lost to new technologies were eventually replaced by new kinds of good jobs, there is no guarantee that without coordinated action this will happen again. So, for the future of work to be a good future, what it is going to take is for all stakeholders in the job economy to work together. This means government, workers and their labour organizations, and business.

The direction of the future of work can not be left up to corporations alone. The evidence is that corporate tax breaks that were meant to stimulate job creation haven’t worked – with the majority of that windfall payed out to shareholders in stock buy backs and dividends, as well as in labour-reducing technology. With corporate profits at record levels, it is fair to consider that some of those profits should be taxed to support retraining and transition programs for workers displaced by new technologies. Even billionaire Microsoft founder Bill Gates has suggested such a ‘robot tax’, to support a universal basic income and retraining plan.

Governments also have a leading role to play – along with unions, the private sector, and educational institutions – to develop a National Skills Strategy to identify training, education, and apprenticeship needs for the future job market. Unions are an ideal partner to deliver retraining. For example, our own union delivers one of the most comprehensive online skills training programs in the country, and like a number of other unions, is ready and able to work with both governments and employers in helping workers prepare for the new jobs of the future.

In the face of the precarious gig economy, governments must also be vigilant in enforcing employment standards to prevent the exploitation of contract and agency workers. Employment Insurance & Training programs must also be revisited, in an era where retraining for the jobs of the new economy may take longer and require extended support.

We can’t be complacent about what is happening now and what lies ahead. Work is vital for income, but it is more than that. A job, along with family and health, make up the core of most people’s lives. Work is part of being social and provides connections to co-workers and the community. For young people, we must also strive to make sure that in the face of automation and AI, young workers can still expect fair employment, good wages, and the opportunity for career development. For older displaced workers, we must commit as a society to provide the resources they need to overcome the impacts of automation.

Automation and artificial intelligence cannot be allowed to be job and community-destructive. But left solely to the private sector or government, they could be. It means more than ever, working women and men we must work even harder to put workers’ rights, and the rights and well-being of families on the public agenda. The new world of work must not be imposed. Workers must help to define it and control it. The new world of work must mean good jobs. They are fundamental to a strong Canada, a fair work world, and a just and thriving future.

Paul Meinema is the national president of the United Food and Commercial Workers Union (UFCW Canada, www.ufcw.ca), representing more than a quarter-of-a-million workers in every aspect of the food chain, as well as healthcare, security, and other key economic sectors across Canada.