Fundraising for The Leukemia & Lymphoma Society of Canada 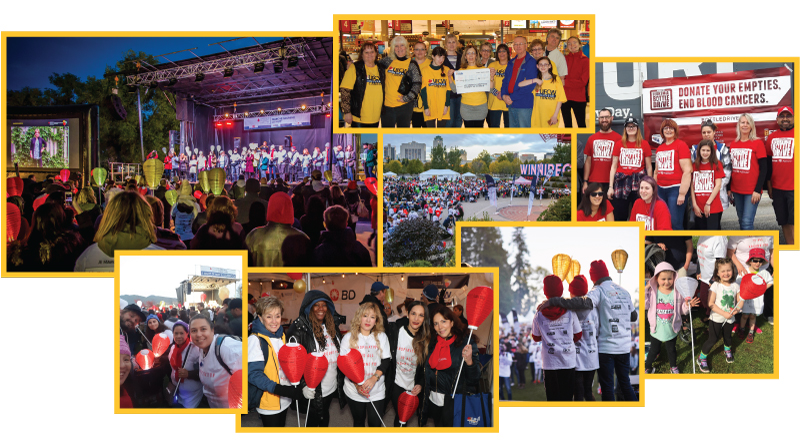 In 1985, our UFCW Canada family of members and Local Unions made a pledge to work together to support the efforts of the Leukemia & Lymphoma Society of Canada (LLSC).

Since then, your tremendous fundraising has raised more than $49 million for the LLSC. Combining all efforts across Canada, UFCW Canada members and Local Unions are a tower of hope and financial support for the work of the LLSC to find a cure, provide better therapies and patient support, and raise public awareness that blood cancer is a battle that can be won.

Advancing together, our LLSC fundraising has made a vital difference. Today, many kids and adults with leukemia and other blood cancers are living longer or are in remission because of new therapies that have led to higher survival rates and a better quality of life.

About the Leukemia & Lymphoma Society of Canada (LLSC)

The Leukemia & Lymphoma Society of Canada (LLSC) is the single largest voluntary health agency dedicated to blood cancers in Canada. LLSC funds life-saving blood cancer research across the country, and provides information and support services free of charge to people affected by blood cancers. The LLSC's mission is to cure leukemia, lymphoma, Hodgkin's disease, and myeloma, and improve the quality of life of Canadians impacted by blood cancers.

UFCW Canada has been an ally, advocate and champion for agriculture workers in Canada since 1980 —successfully leading the campaign for justice,  enhanced rights, safety, and a voice in the workplace for some of Canada’s most exploited workers.

Today, UFCW Canada is also the union for both domestic and migrant agriculture workers with collective agreements in place at locations in British Columbia, Manitoba and Quebec. They are strong contracts that protect the right of both temporary and domestic workers to return to work the next year based on years of service.

In association with the Agriculture Workers Alliance, UFCW Canada also operatesCanada’s largest association for agriculture workers, with a network of 10 help centres across Canada where the rights of all farm workers come first — no matter where they come from.

Since opening the first centre in 1992, UFCW Canada and the AWA have assisted literally tens of thousands of farm workers regarding abusive employers, unsafe workplace and housing conditions, medical treatment and Workers Compensation claims, parental leave benefits, health and safety training, as well as supporting the rights of agriculture workers to form a union.

UFCW Canada and AWA actions have also led to:

“Agriculture workers have the same rights as every other worker in Canada, “says Wayne Hanley, the National President of UFCW Canada. “We have stood with these workers from the beginning, and we will continue to fight for them until their rights are upheld, their workplace is safe, and the hard and dangerous work they do is respected and rewarded fairly.”

Workers in Canada have fundamental rights — including the right to form a union to create a better, fairer relationship with their employer.

It is a right that Walmart cannot ignore because Walmart is not above the law. That law is Canada’s Charter of Rights and Freedoms — our constitution — which has established the Freedom to Associate as a fundamental Canadian right.

In other words, Canada’s highest court has twice ruled that the Charter ensures that workers have the right to join a union and to negotiate a collective agreement with their employer.

As one of Canada’s largest private-sector unions with a strong history of activism, UFCW Canada is committed to ensuring that the labour and human rights of Walmart workers in Canada are respected.

For decades, Walmart workers have tried to improve their lives through collective bargaining. They face tremendous challenges in trying to exercise their rights, but with the assistance of UFCW Canada – and its 250,000-plus members – Walmart Canada workers are making progress.

Since 2002, over 20 different groups of Walmart workers, in several different provinces, have applied to become UFCW Canada members. And despite Walmart’s corporate and legal tactics, some Walmart Canada workers do have a UFCW Canada collective agreement today where they work, because workers understand that by acting together and taking collective action they can improve their workplace and their lives.

If you are a Canadian Associate who wants to join the growing movement for change at Walmart, click here or call: 1-866-977-0772.

UFCW Canada will continue to answer the call every day from Walmart workers who “associate” justice with their Freedom to Associate and form a union.